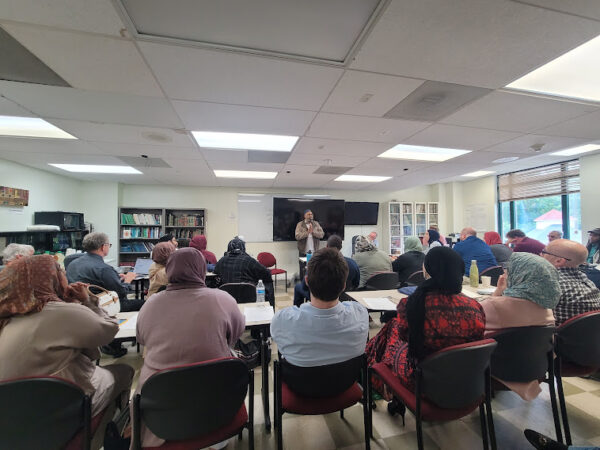 This month, Mishkah students participated in the Emerging Religious Leaders program hosted by the Institute for Islamic, Christian and Jewish Studies (ICJS) at the Virginia Theological Seminary. It brought together 26 students from Muslim and Christian institutions in a program that ICJS describes as “the first of its kind in the Mid-Atlantic region—that is equipping the next generation of America’s congregational leaders with the tools they need to build interreligious communities across the United States.”

Our students had robust conversations with their peers and applied their knowledge to address diverse questions about Islam. Among the program’s presentations and discussions were a comparison of the creation narratives between the Quran and the Bible; monotheism and the trinity; the Apostle’s Creed and the Hadith of Jibreel; and the nature of sin and repentance. Our students also presented on the birth of Isa (as) and his status in Islam.

Mishkah was one of 5 Islamic institutions to attend. Participation in this conference aligns with one of Mishkah‘s stated goals to “create awareness of Islam through positive civil discourse with Western universities and research centers.” Overall the students found the exercise beneficial, and below are examples in which they describe in their own words some of their positive experiences:

I think the impression about Islam was very positive overall and people learned many things that they did not know before or had a poor understanding of. Like the concept of forgiveness in Islam, love, names and attributes of Allah, tawheed etc…My aim was to present the true message of Islam with wisdom and use the informal conversations to build connections and give da’wah. After I came back, I sent a few copies of the Qurans to the people who had provided me their address with their interest in genuinely reading it. May Allah guide them towards the truth – Br Suhaib

“ERL provided a healthy space where Muslims and Christians could come together and talk about important topics and form bonds of service to humanity despite key differences in their respective belief systems. I would recommend this program to anyone who would like to get to know their neighbor in faith a bit better! – Br Mohsen