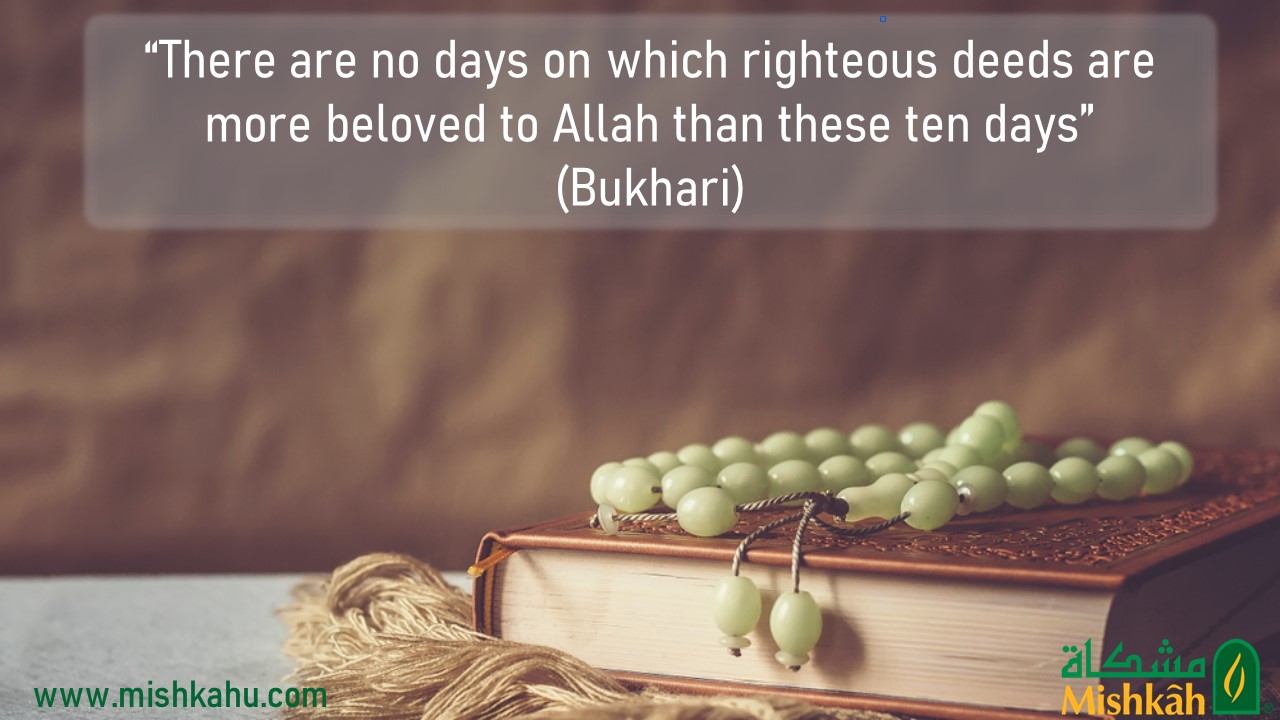 With Allah’s permission we begin one of the most auspicious times of the year – the first 10 days of Dhul Hijjah. The Prophet (saw) declared these days the best 10 of the year when good deeds are most beloved to our Lord. It is a truly sacred month, presenting the only time in the year when the fifth pillar of Islam Hajj can be performed, but also providing a fountain of blessings for all believers as a whole.

While many of us welcome the last 10 days of Ramadan with intense anticipation, the first 10 days of Dhul Hijjah may not be received with as much fervor. They should be. Any opportunity to please Allah is one we should embrace whole-heartedly, especially when its virtues have been proclaimed.

Now especially, as the world continues to face off a pandemic and other crises, our good deeds may be a source of barakah that could alleviate our condition and of those around us. Allah tells us in Surah an-Nahl ayat 97, “Whoever works righteousness whether male or female while a true believer, verily, to him We will give a good life, and We shall pay them certainly a reward in proportion to the best of what they used to do (in the Hereafter)”

Below are a just a few good deeds you can implement over these upcoming blessed days. May Allah accept from us all and amplify our reward.

Praise Allah and make dhikr – These days are a special time to glorify Allah. The Prophet (saw) said, “There is no day more honorable in Allah ‘s sight and no acts more beloved therein to Allah than those in these ten days. So say tahlil [‘There is no deity worthy of worship but Allah: La ilaha illAllah’], takbir [‘Allah is the greatest: Allahu akbar’] and tahmid [‘All praise is due to Allah: alhumdulillah’] a lot.” (Muslim)

Pay attention to your obligatory prayers and increase in your nawafil –
The prayer is an act that is truly loved by our Lord and our means to connect with Him. Its rewards are are numerous. Among them, Allah Most high reminds us, “Recite what has been revealed to you from the Book and establish the prayer. Verily, the prayer prevents one from evil and shameful deeds.” (Surah Al Ankabut 29:45)

Fast especially on the day of Arafah – The Prophet (saw) and his companions would fast from the beginning of Dhul Hijjah but it is especially recommended to fast on the ninth day, which is Arafat. The Prophet (saw) said “Fasting on the day of ‘Arafah is an expiation for two years, the year preceding it and the year following it. Fasting the day of `Ashura is an expiation for the year preceding it.” (Muslim)

Seek knowledge: Educate yourself about Hajj and the significance of its rituals, and the life of the Prophet Ibrahim (a.s) and his family. Learning the deen is always a means of strengthening your iman and relationship with Allah.

Serve humanity: Do good deeds unto others – uphold your ties of kinship, help your neighbor in need, honor the elderly and bring joy to the young. The Messenger of Allah (saw) said: The most beloved people to Allah are those who are most beneficial to the people . . .(At Tabarani)

Forgive and seek forgiveness – try to mend broken relationships and reconcile with those who have wronged you or you have wronged. In turn, also return to Allah with your sincere repentance.

Udhiyah: This a special deed tied specifically to this time. Sacrifice an animal and have the meat distributed locally to those in need in your community. Please note that if you intend to make a sacrifice, you must refrain from cutting your hair or nails during these days, “The Prophet (saw), “When the ten (days) start and one of you intends to offer Al-Udh’hiyah (an animal reserved for sacrifice), he has to abstain from having a hair cut or clipping his nails, until he has offered his sacrifice.” [Muslim].