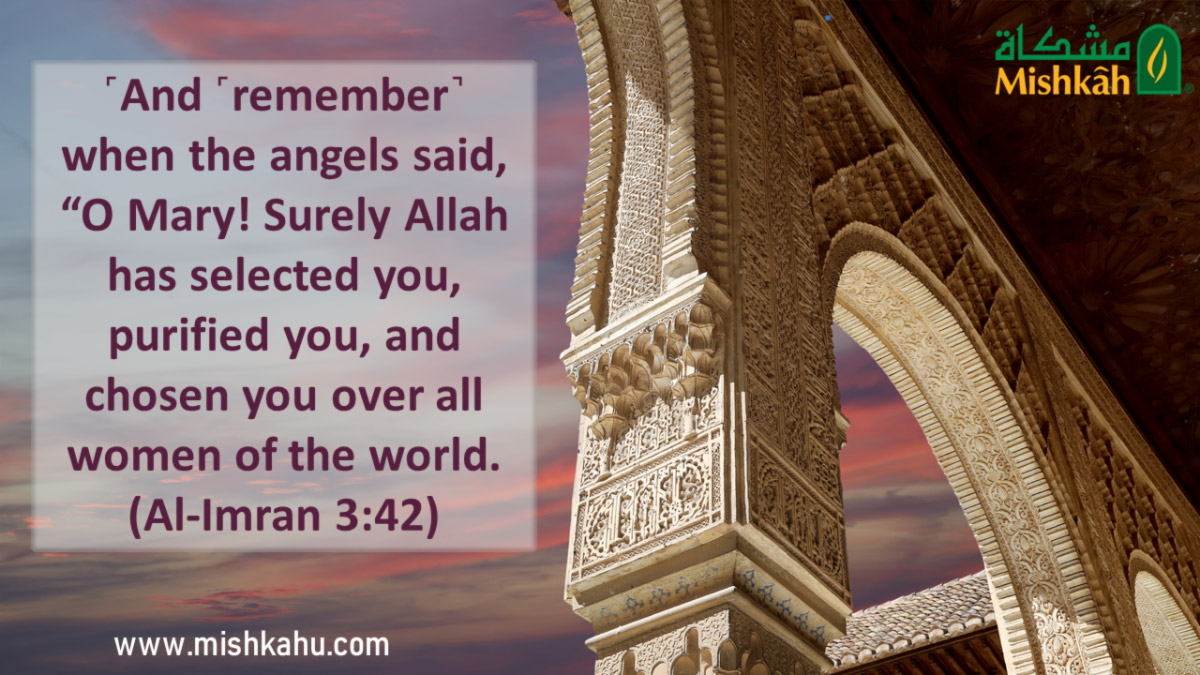 In this season, we are surrounded by messages about our dear prophet Isa (as) and his mother Maryam that are contrary to our beliefs as Muslims. It gives us the perfect opportunity to refresh our own knowledge and reflect on their lives from an Islamic perspective.
Maryam bint Imran is a shining role model for us all, both men and women. Allah most High chose Maryam the mother of Isa over all the women of the world and gave her a special status. Allah describes her as being among al qaniteen – the devoutly obedient. “And [the example of] Mary, the daughter of ‘Imran, who guarded her chastity, so We blew into [her garment] through Our angel, and she believed in the words of her Lord and His scriptures and was of the devoutly obedient.” (Surah at-Tahrim 66:12)
She is the only woman with a chapter of the Quran named after her. Her greatness is due to who she was, not just because she was the mother of Jesus (as). She perfected her faith and demonstrates how to have tawakkul in Allah in the most difficult times, as well as excellence in devotion and worship. ‘O Maryam, be devoutly obedient to your Lord and prostrate and bow down along those who bow down (in prayer), (Surah Al-Imran 3:43). She also exemplifies the best of modesty for both men and women.
Maryam’s mother dedicated the child she was carrying to worship Allah even before the child was born and Allah accepted her and caused her to grow in the best of manners. Maryam’s guardian Prophet Zakariya (as) built a space for her where she was constantly in remembrance of Allah. Zakariya would visit her and find food that was out of season and when he asked where it came from, she said “It is from Allah, Surely Allah provides for whoever He wills without limit (Surah al-Imran 3:37). Truly, a reminder for us to always call on Allah to seek what we need.
As described in Surah Maryam ayat 16 to 34, when approached by an angel in the form of a well-proportioned man, she immediately sought refuge in Allah the most Merciful, symbolic of her piety and modesty. The angel brought glad tidings of the pure child she would carry as Allah had decreed. And Allah provided for her in the most trying of times as she bore the pains of childbirth and as she faced her astounded people with her child, making her baby Isa (as) speak from the cradle to protect her name.
In these challenging times that we live in, Maryam’s ultimate devotion should inspire us in our faith. Allah sees us in our struggle and in our grief and He also sees us in our dedication and steadfastness. He will will provide for us and honor us if we turn to Him in obedience as Maryam did. “Such is Allah; He creates what He wills. When He decrees a matter, He only says to it, ‘Be,’ and it is. (Surah al-Imran 3:47)
Peace be upon Maryam and peace be upon her son Prophet Isa.
Want to learn more about Maryam: Watch this lecture by Sh Mohammad Elshinawy

Winter is the Prize